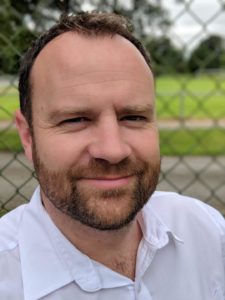 A teacher by profession, Dan spent 11 years teaching RE at Newtown High School followed by 3 years working for the local authority in an advisory role, before taking up his current position as Head Teacher at a local high school in 2018.

Not put off by being surrounded by children all day, Dan and his wife Sharon have 6 children of their own: Bethan, David, Tomas, John, Grace and Evan.

Dan became a Christian at the age of 22 while on a ‘one way’ trip to India!

In his spare time Dan enjoys the odd round of golf, spending time with his army of children, and watching weird martial arts films.

Dan has particular oversight of the work amongst children and young people here at Newtown Evangelical Church.

As a result of the 'fire-break' lockdown announced by the Welsh Government this week, we will not be able to meet together in the building on 25th October, 1st & 8th November, … END_OF_DOCUMENT_TOKEN_TO_BE_REPLACED

It's time for the news at 21:08: WE'RE BACK IN THE BUILDING THIS SUNDAY! 🥳 We'd love you to come too! Yes, you! Come and hear about the most amazing person ever, Jesus Christ, who really does change everything. To book your place, click on this link: newtownevangelical.org/bookin…

Our Home Groups continue today/tomorrow, with all groups meeting online due to the current restrictions. We're on session 2 of @generositypro. Check out thegenerosityproject.com to watch the videos in advance. #HomeGroups #GenerosityProject

"Christianity is, at heart, all about a person. And His name is Jesus." #GospelofMark #Jesus #GoodNews pic.twitter.com/BeqJdtHOa4

Join us at 10am for the conclusion of our series in Habakkuk, "From Fear to Faith". "How To Keep Going" Choose your device📱 and location📍, make your cuppa☕, and join us as we hear👂 what God has to say to us through Lloyd. #Habakkuk #HowToKeepGoing youtu.be/4w4Yx6ufYTE

This morning we're meeting online again- 10am. We're back in our Habakkuk series. Lloyd will be preaching on "From Protest to Prayer". As always, we'd love you to join us! YouTube. Link below. Go on. It might just change your life! 🔗 youtu.be/g0Ca25whBRY #NEConline

The address of the church is: Newtown Evangelical Church, Llanidloes Road, Newtown, SY16 1HL The … END_OF_DOCUMENT_TOKEN_TO_BE_REPLACED